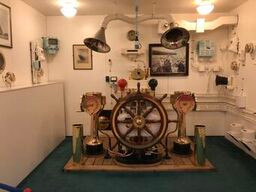 This accessible Edinburgh and Royal Yacht Britannia Shore excursion  is a truly fantastic and relaxing way to gain a surpassing overview of the Capital City of Scotland. See the incredible and imposing Edinburgh Castle, the more serene Palace of Holyroodhouse (along with its timeless Abbey), the adjoining and expansive Holyrood Park and of course, visit and stop at several key points along the World Famous Royal Mile, ending with an internal visit to the fascinating and prestigious Royal Yacht Britannia in Leith! Start your tour by meeting your Tour Guide at the Edinburgh Cruise Dock in Leith, Newhaven or South Queensferry and head out on a memorable, all-encompassing 45 minute scenic drive to Downtown Edinburgh. As you meander your way into the city, you’ll see several popular sites along the way, including the Royal Botanical Gardens of Edinburgh, Fettes College, Stewart Melville College, Donaldson’s College, St. Mary’s Episcopalian Cathedral, George Heriot’s School, the Old Royal Infirmary of Edinburgh and the esteemed West End.

In Central Edinburgh, your comfortable drive continues with incredible highlights including the Usher Hall, West Port, West Bow and the Grassmarket, Victoria Street, Morningside and Marchmont, the National Museum of Scotland, the Palace of Holyroodhouse, and of course, the nearby Holyrood Park. You will also make a short stop by the glorious Edinburgh Castle, located on Castle Rock before adjourning at a number of significant sites of interest along the Royal Mile in the Old Town of Edinburgh. The historic fortress of Edinburgh Castle (once a former Royal Residence) also towers as a major part of the Skyline of the City and protrudes above both the Old &amp; New Towns of Edinburgh, equally in their own respective rights designated UNESCO World Heritage Sites. As you admire the imposing and indomitable castle from various perspectives (both far and near), your Tour Guide will share the enthralling history of the site with you and you’ll have plenty of time to capture many many photographs as well. The first part of your tour ends with a short, enjoyable stroll along the upper half of the famous Royal Mile. This vibrant area of the city is a fun place peppered with shops, street artists, history and the most architecturally interesting and characteristic of buildings.

After experiencing these must-see highlights in the city center, you will once again board your accessible vehicle and head out on a short drive through the quintessentially picturesque areas of Stockbridge and Trinity in Edinburgh not quite yet touched by tourists en-route to the celebrated Royal Yacht Britannia (the former Royal Yacht of the British Monarch, HM Queen Elizabeth II). Escorted by your Tour Guide, you will get to admire and explore the different decks and striking entertaining rooms onboard this gloriously stunning Royal Ship which HM The Queen called her “Home from Home” from the 1950s to the 1990s.

Accessibility Information: The Private Accessible Highlights of Edinburgh and Royal Yacht Britannia uses a wheelchair accessible van and follows a custom designed, step-free route that avoids obstacles and enters attractions using the accessible entrances. Accessible bathrooms with wide doors for wheelchairs are present along the tour route. The number of accessible vehicles are extremely limited. Guests are encouraged to make their accessible shore excursion reservations as far in advance as possible.

Not Included: Snacks/Meals, Gratuities and/or Entrance Tickets. You can expect to pay approx EUR 17 per person for the Royal Yacht Britannia.