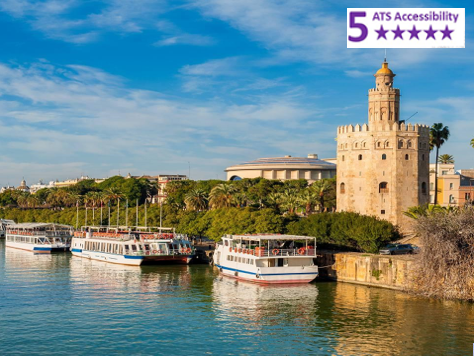 This 8 hour Seville guided tour from Malaga offers a full day of beautiful scenery, historic sites and Andalusian charm. Enjoy a scenic drive from the coast to the Spanish inland, visit the spectacular Seville Cathedral, see the Tomb of the famous Christopher Columbus, explore the beautiful Plaza de Espana, adventure out in the picturesque Parque de Maria Luisa and admire views of the Guadalquivir River.

Start your tour by meeting your tour guide and accessible van at the cruise dock or accessible Malaga hotel. From here, you will set out on scenic drive through the Andalusian inland to the historic town of Seville. Upon arrival in Seville, your driver will take you to the impressive Plaza de Espana, where your tour guide will join you for a 3-hour accessible walking/rolling tour of the heart of the city. This Plaza is considered one of the most spectacular public squares in all of Spain! While here, you will learn about the fascinating history of the site and see where famous Star Wars shots were filmed. The Plaza is located in the middle of the picturesque Maria Luisa Park, an extravagant park setting peppered with green trees, water fountain features, trails and monuments. Using accessible paths through the park, you will take a leisurely stroll to soak in the serene setting. While here, you will also have time to sit down and enjoy a lunch or some Spanish tapas on your own at one of the many restaurants onsite.

Next, your tour continues along the banks of the Guadalquivir River as you are narrated through the most interesting anecdotes and facts about Seville. Along the way, you will admire the breathtaking exterior of the Alcazar of Seville which is a royal Palace originally built for the Christian King Peter of Castile. Together with the adjoining Seville Cathedral, this was named a UNESCO World Heritage Site in 1987. Escorted by your tour guide, you will enjoy a visit to the glorious Cathedral which is the largest Gothic temple in the World. Using accessible routes, you will get to explore the site firsthand and see the famous bell tower, “La Giralda”, and the tomb of the famous world-explorer Christopher Columbus!

Accessibility Information: The Private Accessible 8-hour Seville follows a step-free, wheelchair friendly, route. The vehicles used are fully accessible equipped with ramps or lifts.
Meeting Place: Malaga accessible hotel or cruise dock.
Not Included: Snacks/Meals, and/or Gratuities. Entrance tickets to Seville Cathedral are included.
Cancellation Policy: 80% refund with 10 days notice. No refund with less than 10 days notice. It is your responsibility to communicate with your cruise line to understand any restrictions on disabled passengers using cruise tenders.
Duration: Tour duration is approximate and varies depending on local circumstances. Tours run rain or shine.