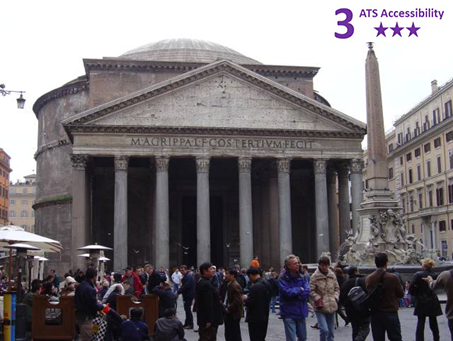 The Private Accessible 5 hour Ancient Rome Tour travels through the heart of Rome to visit the ancient ruins and monuments that helped shape Rome’s past and present. This tour is perfect for the disabled travelers who don’t mind a little bit of uneven terrain in order to view and learn about Ancient Rome.

Your professional tour guide and driver for this accessible driving tour of Rome will meet you in the lobby of your accessible Rome hotel. From there, drive towards the ancient streets to the Roman Colosseum and the Roman Forum. Your guide will take you through the accessible entrances to see as much as possible up close (The Roman Forum is only about 20% wheelchair accessible) and the rest will be explained from the overlook or inside the Forum. An inside visit of the Roman Forum can be done via wheely trekky at an additional charge and will also extend the tour duration.

Your Rome accessible tour continues with a visit to the Victor Emanuel II Monument, also known as the Altar of the Nation, as it sits between Piazza Venezia and Capitoline Hill. This massive monument was built to honor the first King of a unified Italy and is one of the largest in Rome. Your next stop will be at the largest Baroque fountain in Rome and arguably one of the prettiest fountains in the world, Trevi Fountain. Be sure to ask your tour guide about throwing a coin into the fountain! The fountain can get crowded, but it usually can easily be seen by going to the right or left side.

While you are looking at beautiful fountains, this tour of accessible Rome will take you into the Piazza Navona to view the Fountain of the Four Rivers. The four fountain Gods are said to represent the four major rivers of the four continents that are under Papal authority.

This Rome accessible driving tour concludes as you make your way to the Pantheon. Built almost 2,000 years ago, its dome stands as the world’s largest unreinforced concrete dome. Many other sights can and will be seen as you make your way through the ancient streets of Rome, making this a tour full of memories to last a lifetime! You will be escorted back to your central accessible hotel in your private accessible van.

Accessibility Information: The Private Accessible 5 hour Ancient Rome Tour involves minimal walking and follows a step-free, wheelchair friendly route, when available. Due to the nature of ancient Roman cobble stoned streets and ruins, wheelchair users who are less mobile may need occasional assistance.  The tour guide can assist as needed, but it is strongly recommended that you bring a companion to assist during the tour. An assistant can be provided for an additional fee. This tour includes Skip the Line entrance tickets for the Colosseum. Entrance is free for disabled visitors who carry an ID card stating the percent of disability. Other able bodied companions will need to pay.

Not Included: Snacks/Meals and Gratuities.

Cancellation Policy: 80% refund with 10 days notice.No refund with less than 10 days notice.It is your responsibility to communicate with your cruise line to understand any restrictions on disabled passengers using cruise tenders.