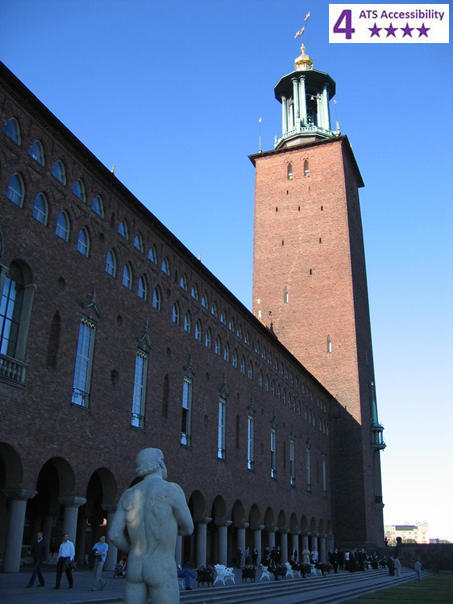 The Private Accessible 6 hour Stockholm Shore Excursion is a great way to see Stockholm for disabled travelers. Get acquainted with this charming city as you are guided through Stockholm in your personal, accessible, transportation.

Your day on this accessible Stockholm shore excursion will begin with your driver and professional guide meeting you at the Stockholm cruise dock or accessible hotel.  Then board your private, wheelchair accessible van with ramp. One of your first stops will be the Royal Palace, the official residence of the Swedish monarch. This large complex contains over 1,400 rooms including apartments for the Royal families, guest apartments, Royal Chapel and State Apartments. In the cellars of the Royal Palace is the Royal Armory, a large collection of artifacts from every Royal family from the 15th century.  Continue on to see Stortorget Square, the oldest and most charming square in Stockholm. Lined with beautiful buildings and inviting cafés, this square will take you back in time to the heyday of Imperial Sweden.

This Stockholm accessible shore excursion will also take you to Riddarholmen Island. This small island in central Stockholm is home to Riddarholmen Church, its central landmark. The church has been used as the royal burial church since the 17th century and many Swedish monarchs are buried on the grounds.

From there, this shore excursion of accessible Stockholm will take you inside the Vasa Museum, a maritime museum located on the island of Djurgarden. The museum houses many artifacts including a 17th century ship that sank on its maiden voyage after only 20 minutes at sea!  It is also the only 17th century ship salvaged almost fully intact.It is quite a sight to behold! This Stockholm accessible shore excursion will also take you inside City Hall. See inside the Blue and Golden Halls where all the Nobel celebrations/ceremonies take place.

Your day in Stockholm will conclude on this accessible tour with your driver and professional guide returning you to the cruise dock or hotel in your private, wheelchair accessible van.  You will be able to reminisce on an intriguing day of Swedish history and sightseeing that will not soon be forgotten!

Not Included: Snacks/Meals, and/or Gratuities.