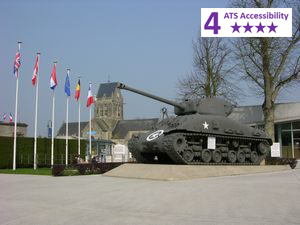 The Private Accessible 9 hour Le Havre Cruise Excursion is a full day adventure exploring the many fascinating D-Day sites of Normandy. The tour includes an accessible van for the day, your own private tour guide and a fascinating memorable trip “back in history”.

This full day Le Havre shore excursion starts at the cruise dock, where you’ll be greeted by your private guide and accessible van. You’ll hen head out on a 2 hour drive to the West Coast, which is peppered with significant ex-battle sites, monuments and other must see WW2 sights.

Your day in Normandy will include visits to the famous Utah Beach, Omaha Beach, and Sainte-Mere-Eglise, all used for landing sites for the American airborne Forces during the War. You’ll also make a stop at the Pointe du Hoc Ranger Monument, which was made by the French to honor the American Second Ranger Battalion, who scaled the 100 foot cliffs and seized the German artillery pieces that could have fired on the American landing troops at Omaha and Utah beaches. As you will see during your visit here, the battlefield character of Pointe du Hoc is still intact. More than 600 tons of bombs were dropped at this site during the War!

An accessible cruise excursion in Normandy would not be complete without a visit to the Normandy American Cemetery and Memorial. This impressive memorial site contains graves of 9387 American military personnel, most of whom lost their lives in the D-Day landings. In the center of the memorial you will see a 22 foot bronze statue, a display of battle maps, and the “Walls of the Missing” with 1557 names inscribed. If time allows, you’ll also make a visit to the fascinating Airborne Museum, a French museum dedicated to the memory of American paratroopers, who were dropped into Normandy back in 1944.

After a full day of visiting and learning about significant historic WW2 sites, your day of exploring Normandy ends with a 2 hour relaxing ride back to the cruise dock in Le Havre.

Accessibility Information: The Private Accessible 9 hour Le Havre Cruise Excursion uses a wheelchair accessible van that picks up and drops off at the Le Havre cruise dock. During your stops at the various D-Day sites, your friendly guide will lead you using wheelchair friendly, step free routes.

Cancellation Policy: 80% refund with 10 days notice. No refund with less than 10 days notice.It is your responsibility to communicate with your cruise line to understand any restrictions on disabled passengers using cruise tenders.