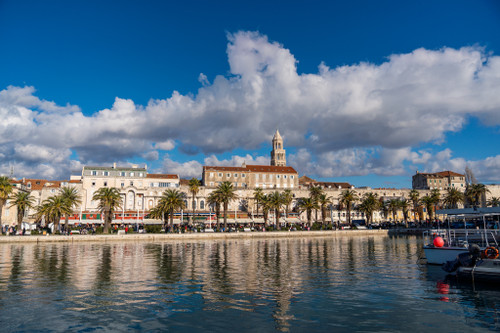 This accessible Shore Excursion gives you an opportunity to explore breathtaking and diverse Romanesque, Renaissance and Baroque style architecture and history in not one but TWO UNESCO World Heritage cities, Trogir and Split. You will also get to visit the incredible Diocletian’s Palace – the best Roman Ruins on the Eastern side of the Adriatic!

Start your tour by meeting your tour guide accessible van at the Split cruise dock. From here, you will head out on a panoramic drive to the charming town of Trogir which was settled by Greek colonists around the 3rd century BC. Escorted by your tour guide, you will enjoy a memorable stroll along the ancient streets in the heart of the city, peppered with a fascinating blend of Romanesque, Renaissance and Baroque architecture. While in Trogir, you will also make a stop to see the majestic Kamerlengo Castle from outside. This incredibly massive fortress was built in the 15th century by the Republic of Venice and has an intriguing history to be shared.

After your visit to Trogir, you will once again enjoy a scenic drive along the beautiful Adriatic en-route to Split. Along the way, your tour guide will point out important roman ruins and historical sites to truly give you an idea of the wonderful treasures hidden here.

Upon arrival in Split, you will head out to explore the very heart of the city with your tour guide. Among other things, you will get to visit the incredible ruins of the Diocletian’s Palace which was completed in 305 AD for the Roman Emperor. These are the best Roman Ruins on the Eastern side of the Adriatic! Walk/roll along the ancient pathways through the beautiful arches and columns that make up the above ground section of the ruins, and enjoy an opportunity to go underground to the fascinating cellars beneath the Palace.

Accessibility Information: The Private Accessible 4 Hour UNESCO Trogir, Old Town Split and Roman Ruins Tour uses a wheelchair accessible van with ramp/lift to pick you up and drop you off at the Split cruise dock. Guides are not allowed to push wheelchairs. Accessible bathrooms with wide doors for wheelchairs are present along the tour route. The number of accessible vehicles are extremely limited. Guests are encouraged to make their accessible shore excursion reservations as far in advance as possible.