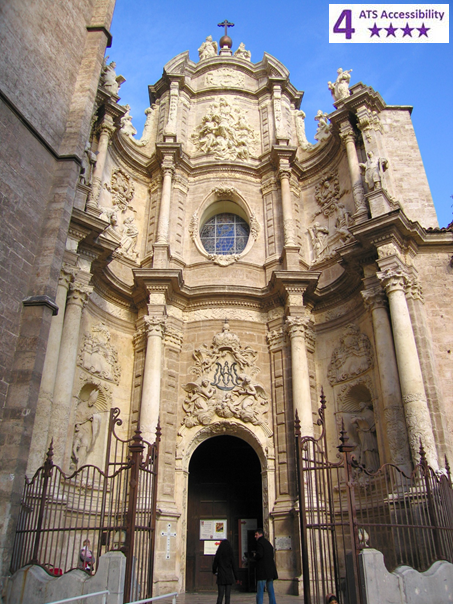 The Private Accessible 3 hour Valencia Guided Tour takes you on a private walking/rolling tour through this ancient Spanish city. You will learn all about its history and architecture from you professional and knowledgeable tour guide. This accessible guided tour follows a step-free route, whenever possible, and includes round-trip transfers from the cruise terminal or accessible hotel in a private, wheelchair accessible van with ramp.

This accessible Valencia guided tour begins with your guide and driver meeting you at the Valencia cruise terminal or hotel with a private, wheelchair accessible van.Once inside the city you will get to see and experience several notable cathedrals; the Basilica of the Virgin of the Hunchbacks, Church of the two Saint John’s and Valencia Cathedral. The Valencia Cathedral houses the Holy Chalice of Valencia. This chalice is widely believed to be thechalice used at the Last Supper and has been the official papal chalice for many popes including Pope Benedict XVI.

This guided tour of accessible Valencia allows you to revel in the beauty of the different architecture styles that line the city streets. UNESCO has deemed the La Lonja de la Seda Civic Building a World Heritage Site as an excellent example of late Gothic style. You will also get to see the combination of Roman, Gothic and Baroque as you study the gates leading into the city such as the Torres de Serranos.

This Valencia accessible guided tour also takes you to Valencia’s bullring , the Plaza de Toros de Valencia (exterior visit only). The impressive, neoclassic building is quite a sight to see as your knowledgeable guide gives you the history of the bullring and bullfights in Valencia. Another stop along the way includes the Central Market of Valencia. Here you can sample local specialties and enjoy the culture of this ancient Spanish city. You will have the options of staying a little longer in Valencia to explore on your own, having lunch in an accessible restaurant or simply enjoying the atmosphere.  Your guide and driver will then return you to the cruise terminal or hotel in your private, accessible van.

Accessibility Information: The Private Accessible 3 hour Valencia Guided Tour uses a wheelchair accessible van with ramp and follows a step-free, wheelchair friendly, route whenever possible. You will encounter some hills and cobblestones. However, your professional guide will be able to assist by pushing a manual wheelchair, if needed.

Dress Code: Covered knees and shoulders are required when visiting the interiors of churches.